I had an archetypal super-hero dream the night before last. If you know me, you know I love and read a lot of comics. Surprisingly, though, they don't figure into my day to day psyche all that often.
Ever see the movie Unbreakable? Clearly, this dream was inspired by that premise. SPOILER ALERT ------ In the film, Samuel Jackson's Character, a Mr. Glass, approaches Bruce Willis' character and identifies Willis as an archetypal "hero", one chosen by the universe to be a "savior". This situation feeds the plot for most of the film, then the twist at the end -SPOILER ALERT- Jackson reveals that he knows Willis is the Hero, because he (Jackson) is his opposite, his negative doppelganger, his "villain". Hope I didn't ruin it for you, great film.

In my dream someone real from my life, someone I know personally though not well, came to me and identified himself as my "Villain", my opposite number. I will call him Edifice, though he did not identify himself to be named this. He identified me to be the hero, which I will call Samson. Thinking of it now, it is fascinating to me that my subconscious chose this person for this role - though I don't know him well and we are not competitive professionally or otherwise, we have had regular contact. The dream does shed light on a strange "adversarial" feeling emanating from him, just below the surface.

What stood out from this dream, was this exchange --

EDIFICE: ...and as your opposite, what do you suppose would be my greatest aspiration?

SAMSON: To see me destroyed.

EDIFICE: No. No. To see you suffer.

That woke me with a shudder.

What keeps going thru my head as I play this out and seek meaning for it in my own life is the idea that we are all our own worst enemy. That our opposite is still our self.
If this is so, is there some part of ourselves that wants to see us suffer, that creates thoughts or actions of failure - not because it wants to see us fail and have an end to it - but because it feeds on the constant stream of suffering that such thoughts create?
Posted by ron bohmer at 8:41 AM 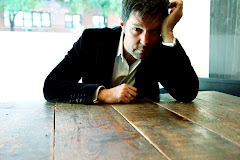